Does Cinnamon help with blood sugar?

Cinnamon is universally known for its flavoring profile amongst many cultural dishes and western confectionary goods. This household spice bolsters not only flavor enhancements, but it also has medicinal benefits.

When not taking with generous amounts of sugar it can support multitude of benefits in the body. Most cinnamon in our pantry is called cassia cinnamon. This is considered a low quality and cheap cinnamon which is mostly found in grocery stores. But with the intention for food flavoring it’s the most economical and effective commodity. For supplementation purposes, there are different types of cinnamon that contain higher medicinal quality.

There are 4 types of cinnamon:

In terms of quality, Ceylon cinnamon is considered the true cinnamon with the lowest coumarin content. Coumarin is the toxic organic compound in all cinnamon which appears to be carcinogenic and hepatoxic. Excessive consumption of cinnamon (especially those with high coumarin contents) can lead to liver damage, impaired cognition and cancer.

Today we’ll focus on its efforts of Cinnamon on alleviating glycemic effects. But first we’ll dive into cinnamon’s suggested mechanisms of action and get an idea on how it may induce hypoglycemic functions.

In lab studies, cinnamon contains polyphenol polymers which are investigated to possess antioxidant function. Specifically, cinnamon’s polyphenols have a unique set of compounds that consists of flavonoids, catchins and epicatchins.

One polymer, procyanidin type-A, is suggested to stimulate insulin-like activity. Procyanidin is believed to promote the activation of AMPK which initiates GLUT4 receptors which transports glucose from our blood into our muscles, cells and organs. Therefore, procyanidin is able to increase glucose uptake and ameliorate hyperglycemic effects.

To further investigate this claim researchers used ceylon cinnamon to help upregulate GLUT4 receptors by measuring its plasma membrane in rats. While administering cinnamon, the results of GLUT4 plasma levels increased from 42.8% to 73.1%. This may potentially validate cinnamon’s mechanisms in glucose transportation. (1)

Cinnamon was observed to increase PPAR-alpha and PPAR-gamma expressions. PPAR stands for peroxisome proliferator-activated receptors, which are nuclear receptors that when activated it triggers lipid and glucose metabolism. The effects of activating PPAR lowers triglycerides, increases HDL levels and sensitize insulin activity. An aqueous cinnamon extract was shown to help regulate PPAR expressions in lab and mice studies. (2)

Although the effects were validated in lab and mice studies, more research is needed to verify the effects remain effective in human trials. (5)

After exploring cinnamon’s anti-hypoglycemic and anti-hyperlipidemia mechanisms lets see how effective cinnamon performs on clinical trials. Results will help us enhance our understanding whether cinnamon is an effective supplement for blood sugar.

1. One study tested the consumption of cinnamon at three dosages: 1g, 3g and 6g. Participants’ preprandial (before meal) blood glucose and postrandial (after meal) blood glucose were measured at 20 days and 40 days of supplementation. Researchers found no significant differences for prerandial blood glucose at 1g and 3g but notice a greater change at 6g. (6)

For postrandial blood glucose, measurements revealed a positive difference for all three levels of consumption. Analyzing the differences between 20 days versus 40 days for prerandial reported no statistical impact for 1g and 3g meaning the longer the consumption the effects were a minor plateau. But at 6g, the effects reduced on day 20 and further reduced blood glucose at day 40. (7)

For postrandial levels, the average differences between day 20 and day 40 resulted significant changes for all levels of consumption. In terms of percentages, postrandial consumption for 1g on day 40 only 0.20% decline in average hbA1c levels, for 3g only 0.19% reduction and for 6g had a larger reduction in average HbA1c levels of 1.9%. The reduction between consuming 1g and 3g were nearly identical suggesting ineffective results in lowering HbA1c levels. Consuming 6g of cinnamon demonstrated a larger effect in lowering average HbA1c levels [see table 3-5]. (8)

In conclusion, ingesting 1g or 3g of cinnamon proved to have very little support in lowering the average HbA1c levels before and after meals for a duration of 40 days. The amount that displayed significant reductions was consuming 6g of cinnamon before or after meals for 40 days. This suggest that cinnamon does contain glycemic-lowering effect but by consuming a high dosage of around 6g. Anything less than 6g will yield minimal results. (9) 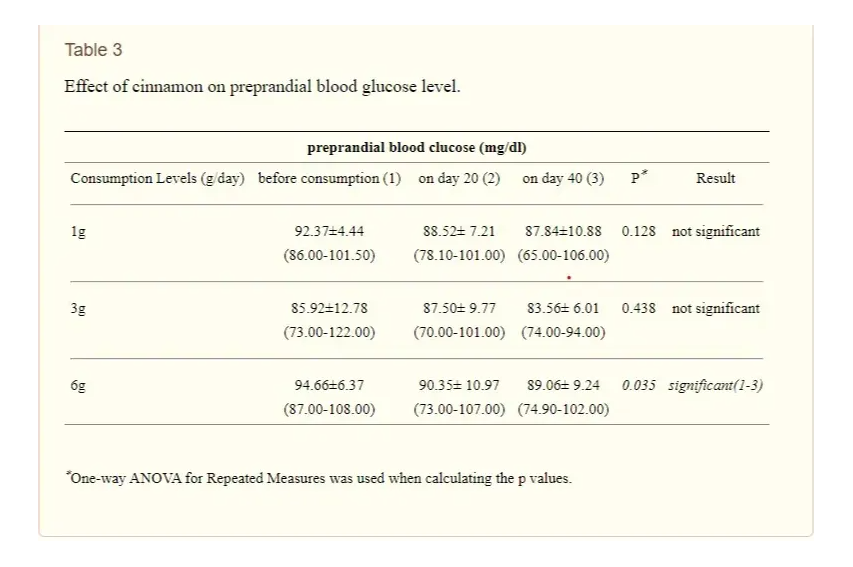 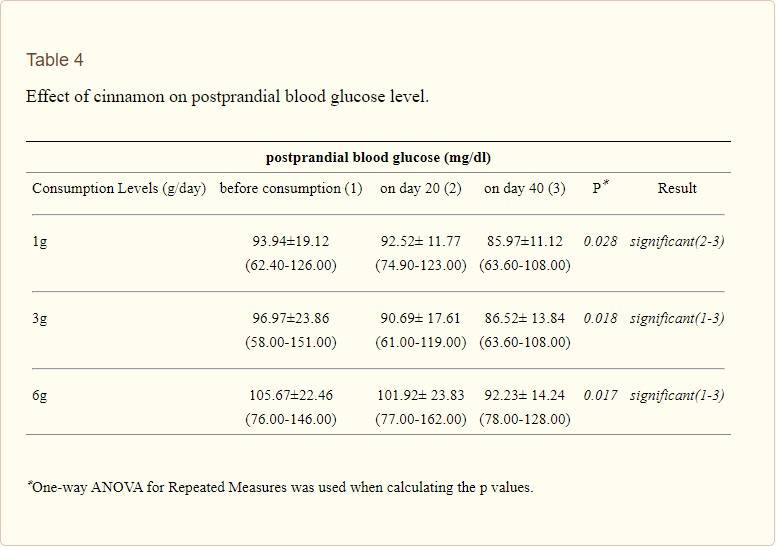 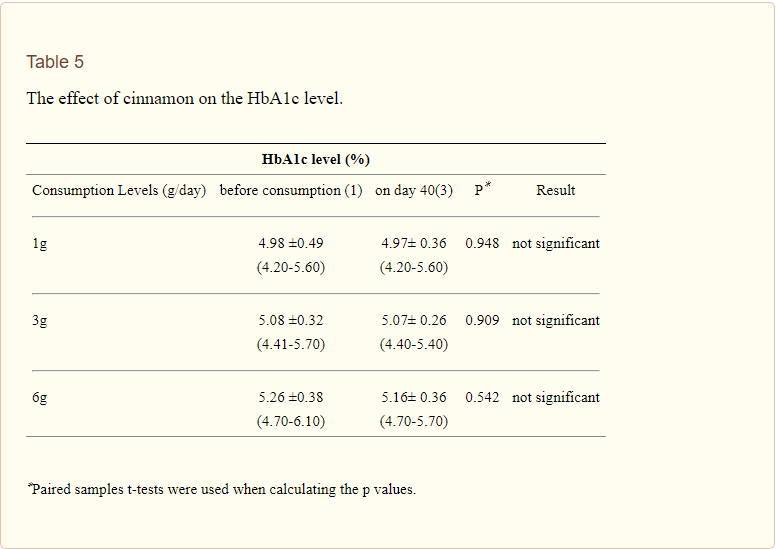 2. A random controlled study was performed which conducted a group of 70 type II diabetic patients. Groups were split evenly with half of the group received cinnamon and the other with a placebo. Dosage was administered at 500mg twice a day, one after breakfast and one after dinner. The duration of the study was for 60 days. Patients were routinely followed up for the first 30 days and last 30 days. Researchers measured their BMI, HbA1c, and their fasting blood glucose. (10)

The results of the study showed no significant difference in fasting blood glucose and HbA1c. Even after 60 days of cinnamon supplementation, there were no positive changes in the patients’ glucose levels. For clarification, fasting blood glucose is a measurement of glucose in the blood after overnight fast. Meaning the level of glucose that’s still in your blood stream first thing in the morning. For HbA1c, this is the measurement of the average of blood sugar over a period of time. (11)

In conclusion, with 1g supplementation of cinnamon for 60days did not induce significant changes in blood glucose levels of those with type II diabetes. Cinnamon was not an effective supplement base on this study. (13)

3. A randomized study selected 79 type II diabetic patients to test the effects of water-soluble cinnamon extract. Patients were divided into groups with one group receiving 3g of water extracted cinnamon and the other receiving a placebo. The study reported a 10.3% reduction of fasting plasma glucose in the cinnamon group. (14)

HbA1c did not receive a reductive effect from ingestion of the cinnamon. Researchers also observed a correlation between the decrease in fasting glucose and patients with a higher glucose baseline. (15)

End of the study concluded results of the group that received cinnamon had an average reduction of 0.83% versus 0.37% reduction in non-fed cinnamon group. Base on this study, cinnamon seems like to have some effect in lowering HbA1c levels in those that received their usual care from their physicians. (18)

Cinnamon supplemented on top of the patients’ daily care seems to have a stronger effect than those that did not receive cinnamon. In conclusion, adding cinnamon to one’s care regime may potentially reduce their HbA1c levels. (19)

5. Another study to see the effects of cinnamon on HbA1c was conducted. Volunteers included 58 type II diabetic patients which received 2g of cinnamon and while others received a placebo over the course of 12 weeks. The patients’ HbA1c levels had baseline greater than 7%. (20)

After the study, the participants treated with cinnamon had a reduction of their HbA1c levels from 8.22% to 7.86%. Other values such as fasting blood glucose, blood pressure, body mass index, and waist circumference also experienced large decreases from baseline. (21)

These results seem contradicting with many findings as this was one of few studies that reported reductions in nearly all measure of the study. This aim of the study did not appear to differentiate from other studies which suggests that it may not be a reliable source to validate the effects of cinnamon. (22)

6. Here another study investigated cinnamon’s effects on HbA1c. The trial selected 60 type II diabetic patients to receive a therapeutic combination of cinnamon with metformin or sulphonylurea versus a control group while treated with a placebo. (23)

The cinnamon group received 1g daily for 3months. The results revealed that the cinnamon group with BMI greater than 27 had a stronger effect on their markers (BMI, body fat, fasting blood glucose, fasting insulin, insulin resistance, and total cholesterol, LDL and HDL. In conclusion, it may seem cinnamon is most effective in those with a BMI higher than 27. (27)

8. A study was conducted on a specific brand of cinnamon extract called CinSulin. A randomized study included 137 diabetic patients with dosage administered 500mg a day versus a placebo for a span of 2 months. (28)

In conclusion, it may seem that water-extracted cinnamon may appear to possess a stronger efficacy in lowering glycemic values. For dosages at 500mg was able to achieve favorable reductions throughout the end of the study. Quite possibly the quality of cinnamon extract may play a factor in its efficacy. (30)

9. A review of numerous clinical trials involving diabetic patients with the use of cinnamon was evaluated to understand the overall effect on glycemic indexes. Collectively, 10 trials with a total of 577 type I or II diabetic patients participated in cinnamon induce studies. Average dosage was 2g for a duration of 4-16 weeks. (31)

The results analyzed by researchers came to be inconclusive whilst claiming no significant reduction on HbA1c. In conclusion, many studies have reached similar results of cinnamon not capable of lowering HbA1c or after meal glucose levels. This suggests cinnamon at around 2g taken for about 1 month or more may not produce favorable results for blood sugar. (32)

10. Another aggregate analysis of 16 randomized trials were examined to understand the results of cinnamon on blood glucose. Upon collective investigation, many studies reported cinnamon to significantly decrease fasting blood glucose and improve insulin resistance. Although findings also exhibited no positive reductions in HbA1c and lipid profiles. (33)

In conclusion, cinnamon may only contain subpar benefits in improving glycemic profile. Many studies reported no impactful variations in HbA1c and other lipid markers. This suggest more trials are needed to warrant further investigation on cinnamon’s effects. (34)

Overall takeaway, it seems like cinnamon may or may not have hypoglycemic effects. The studies that reported positive results were those that contain higher dosage amounts, prolonged trial duration, supplemented on top of daily activities and enhance quality of cinnamon extract. On the contrary, other findings that did not yield conclusive results from those that contained a low dosage amounts of 1-3g and those that reported minute improvements on partial glycemic index. So to determine if cinnamon helps with blood sugar will greatly vary in results. Depending on the method of consumption, cinnamon may improve overall glucose levels but not on a significant level. For adequate results, cinnamon seems to be a potential candidate to provide mild glycemic benefits.